Rectovaginal fistula is a fistula between the lumens of the rectum and the vagina.

In most cases, the disease has acquired character, is much less likely to be congenital. In such cases, fistulas differ in their peculiar topographic and anatomical forms and methods of treatment.

The causes of rectovaginal fistula

The causes of rectovaginal fistulas are quite diverse. The most frequent of them are pathological births (prolonged labor, a long anhydrous interval, ruptures of the perineum after childbirth) and inflammatory complications of surgical benefits during obstetric care. Among the causes of rectovaginal fistulas can also be called inflammatory changes from the postoperative wound after interventions during childbirth.

Various inconsistencies in the birth canal and the size of the fetus, its incorrect position, obstetric operations can lead to rupture of the perineum with damage to the walls of the vagina, rectum, divergence of the anterior portion of the muscle, raising the anus (levator), and rupture of the rectum. In these situations, urgent surgical intervention is performed, with approximately one in ten patients developing inflammatory complications in the operation area, most often this is the inconsistency of the sutures on the intestinal wall. 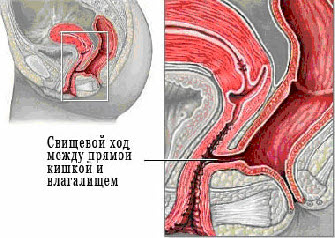 Symptoms of suture defects appear on the 3-5th day of the postoperative period and are manifested by the release of gases and fecal contents from the vagina. In such a situation, one involuntarily arises a desire to urgently repair the defect again. Such actions are a gross mistake, as the healing of a purulent wound can not be done under any conditions, and the repeated inconsistency of the sutures only increases its size. A similar course of the pathological process develops in the postpartum and postoperative fistula. As a result, they are of a labial character, with defects in both organs being equal in height. The absence of a fistulous course is of extremely important practical importance - in the rectovaginal septum there are never purulent cavities or fouling. The rarer cause of rectovaginal fistula formation can be trauma to the rectum wall during various operations on the pelvic organs, as well as spontaneous opening of the acute paraproctitis in the lumen of the vagina (when the accumulation of pus erupts into the vagina) and traumatic damage to the rectovaginal septum. Rectovaginal fistulas can also be complications of diseases of the rectum and large intestine, for example, with Crohn's disease, diverticulosis of the colon (especially in women after hysterectomy). Other topographic and anatomical features are revealed in trauma (by the type of "fall on the count"), fistulae on the soil of colitis or acute paraproctitis. A third of these patients have a tubular fistula, the stroke is often branched, with the presence of encysted purulent cavities or foulings in the surrounding tissue.

Symptoms of rectovaginal fistula and its clinical course

Classification and types of rectovaginal fistulas

Rectovaginal fistulas are conventionally divided into:

It is most convenient to determine the height of the rectovaginal fistula by a fistulous opening in the wall of the vagina. The length of the vaginal tube is about 9 cm, the back wall is available in the mirrors almost up to the arch, so you can see the suture itself and discharge from the fistula. And since in the overwhelming majority of cases the opening in the wall of the intestine and the vagina coincide, the height of the fistula can be judged by the localization of the fistulous opening in the vagina. With guboid anastomosis, their structure and localization are specified by finger research of the rectum and examination of the vagina in the mirrors using a buttoned probe. In bimanual examination, the degree of cicatricial and inflammatory periprocesses is determined. Some difficulties may arise with a high cervical location of the defect. More voluminous may be research in tubular fistula. They include a dye test (a mixture of methylene blue with hydrogen peroxide 1: 1), fistulography using water-soluble contrast agents. It is more expedient to administer drugs through the external opening, the internal is verified with the help of a rectal mirror, a sigmoidoscope. In complex cases, the most complete information is provided by procto-, vagino- or irrigography. Diagnosis of the concomitant degree of failure of the anal sphincter and the volume of its scar lesion includes the mandatory determination of the rectoanal reflex and rectal finger examination. The most objective information is provided by pathophysiological studies (sphincterometry, electromyography, manometry), as the clinical evaluation of the incontinence of individual components of intestinal contents is masked by their release from the vagina. All patients undergo a sigmoidoscopy, if necessary, differential diagnosis-video coloscopy and irrigoscopy. In order to detect all the moves and spurs of the rectovaginal fistula, its internal opening, transrectal ultrasound (TRUSD) is widely used in our clinic.

The need for differential diagnosis of the rectovaginal fistula occurs in those cases when it is suspected that rectovaginal fistula is a complication of some disease. The fistula can be formed due to the germination of a malignant tumor into the wall of the vagina. Finger and endoscopic examinations must necessarily be supplemented with cytological or histological studies. Irrigo- and colonoscopy can exclude diseases such as Crohn's disease, diverticulosis, complications with the formation of rectovaginal fistula. With Crohn's disease, fistulas can be multiple. Any unusual appearance of the defect (polypoid formations in the wall or pronounced growth of granulations) should be alarming. In these cases, a biopsy of the affected tissue is performed, followed by a histological examination. Fistulas formed as a result of a complicated course of a disease can not be the object of an independent operation, they are eliminated during a radical intervention about the underlying disease.