This method is suitable for treatment of internal hemorrhoid. Rubber band encompasses the hemrrhoidal tissue and reduces arterial flow to the hemorrhoids. Hemorrhoidal piles with rubber bands fall out in 7-10 days. Often, there is necessary to accomplish several rubber band ligations with 14-16 days- interval each.

Rubber band ligation employs a special gun on which a rubber band is fitted and from which it can be realize by a trigger mechanism. This gun which has a barrel at the top on which the rubber band is placed, allow the hemorrhoidal tissue to be drown by a vacuum which made by suction connected with gun. The released band encompasses the tissue, which then sloughs, creating necrosis at its base and subsequently a scar. 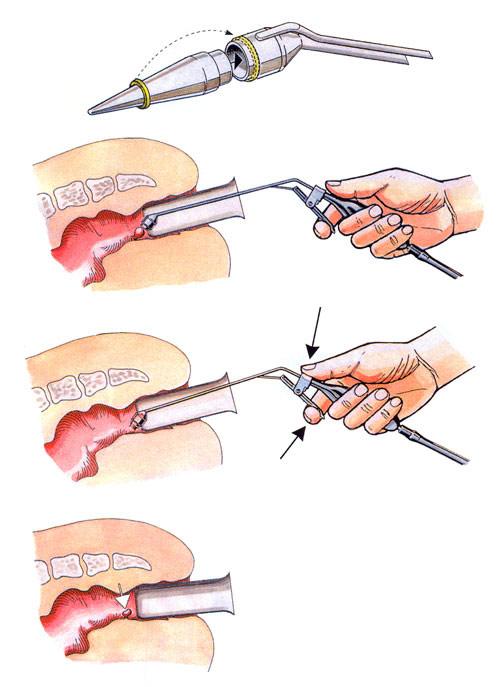 During procedure, point for ligation is selected 5-7mm proximal to the dentate line. Ligation of internal hemorrhoidal piles applies generally two, three or more times. There is better to apply ligation of one pile during one procedure.

Sometimes if hemorrhiodal pile is very big (bigger then barrel at the top of the gun) and it is impossible to ligate all pile right away, there is necessary to accomplish several procedures with 1 month-interval. Our department one of the first in Ukraine began accomplishing this method. Now (since 2003 year) we treated more then 700 patients. Effectiveness of this method is 85% (there is identical with our foreign colleagues).

V congress of coloproctologists of Ukraine

17th Star of the European Association of Coloproctologists (ESCP)

Videocapsule endoscopy of a patient with SCC of unclear genesis